Getting Paid for Community Journalism warms my Heart

Thus begins my freelancing for Patch…

I love hating on “the man” , but 2011 has me still working for AOL. For those that don’t know me, for a while I was writing on AOL’s Walletpop, but I knew the day I was recruited that I would not write for Walletpop’s Money College for long  as I had a very hard time in college. I thought my depression sucked when I was a teenager, but damn, college was a whole other story. This one piece of mine is still one of their all-time traffic getters though (I am being modest – I should really say “top story ever”)…

For Wilmette-Kenilworth’s Patch, I will be profiling candidates running for  local office. You can read my first interview here.

Recently, my hyperlocal sister site covering Chicago’s north side (I say sister because Center Square Journal covers a couple neighborhoods on the other side of the Chicago River) broke a story on the Ravenswood Chamber of Commerce closing down due to what appears to be financial mismanagement and increasing levels of corruption.

CBS also picked up this story, and credited the Center Square Journal. I am happy for the fabulous Sam Abernethy (full disclosure: she is my friend!), but also a little miffed.

However, I really want to be attributed more on local networks for news I break. Is this the time for me to break the blogging format, and write news pieces without the “I”? If I do this, will I alienate the neighbors I have been slowly cultivating that occasionally blog on the site about neighborhood issues? Or perhaps my whole notion of getting people more involved in neighborhood affairs by writing about it is misguided….

What is also very interesting about the above linked CBS piece is there are multiple links embedded in the story – both to appropriate webpages on the internet, but also to the actual CSJ piece, a traffic sharing method traditional news outlets have been slow to adopt.

Re: Tacky Gawker Stockings, or, Common Sense Rules for Advertising on the Internet 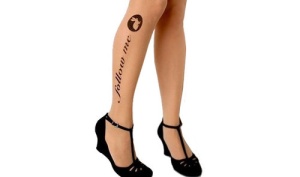 very unlike their current fashion ethos.  A former True/Slant colleague of mine, Raincoaster, tweeted:

If they’re going to run fashion ads, they NEED a fashion editor so they dont look stupid and/or desperate. That’s a pricy ad

The majority of the sponsored blog post debate has raged over the crumbling wall between editorial and advertorial, but I am not going to touch on those issues as I whole-heartedly support sponsored posts, on one condition. If the website in question has control over the ads. END_OF_DOCUMENT_TOKEN_TO_BE_REPLACED

If you haven’t seen it yet, check out this piece I did for Gapers Block! The lovely and artistic Erin Robinson was a great interviewee.  An excerpt to get you salivating:

How did you make the switch from wanting to become a psychology professor to being a video game developer?

I was working in a lab and at one point the professor who I was working under called me into his office and said, “It’s clear to me that there’s something else you’re rather be doing.” And I said, “Oh, I guess you’re right,” and I went home and worked on my game. That’s all I could talk about.

Originally when I started making games, I didn’t tell any one that I was designing games — I thought it was super geeky and a lot of my friends didn’t even know. Even the people I was drawing cartoons with — cartoons are fine, but video games?

One of my latest posts for my neighborhood community service blog, about this gym that looks more and more like a scam, was picked up by CBS (watch the video here). Naturally, I am flattered. And the journo who did my piece is so poised and lovely.

No credit… but so it goes with traditional mainstream media! Great conversations in the comments on the merits of both media at this link here, including The Parking Ticket Geek’s idea on how to attribute bloggers and save networks money at the same time.