The ˝Playing With Pictures: The Art of Victorian Photocollage˝ exhibit over at the Art Institute is showing for only a couple more days. This particular exhibit features collages in photo albums created by the wealthiest Victorian women. The art of photography was brand new back then, and only the most well to do families had access to a camera. The fact that these women were able to cut up these photographs spoke of their wealth. The majority of books are too old and fragile to allow you to flip through them, so the exhibit curators scanned the artwork onto a number of moniters for easy access. The Playing With Pictures exhibit is small, but very well put together.

END_OF_DOCUMENT_TOKEN_TO_BE_REPLACED 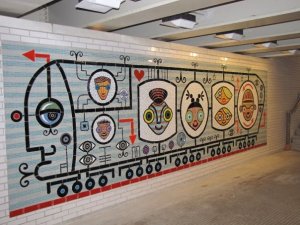 As most of you Redline Belmont stop users already know, the Belmont Redline train station has a new detailed mosaic. If the artwork looks similar to the old mural, it is because it is done by the same artist, David Csicsko. I met with Csicsko (the Hungarian pronounciation is “cheech- ko”) a couple of days before the installation was complete.

END_OF_DOCUMENT_TOKEN_TO_BE_REPLACED

All this digital art is beginning to get on my nerves. Why do I need a machine to make art? To view art? Everyone is glued to their “magical internet machines”…. am I alone in using art to disconnect from the web? :

Realizing the important doors technology opens for artists, Chicago Art Department program and exhibition coordinator, Mike Norse, led a class of ten local artists who combined talents in digital sketching, animation, photography, sound and video with the aim of a culminating group exhibition titled, iPhone Therefore I Am. Collaborating with national and international iPhone artists from as far away as Russia, Norway, Spain, France, and Germany, the local artists unveil their show and creations in the new year.

What about the artists who don’t use an i-phone… or can’t afford one? What happened to all the starving artists? Oh, right. They went into advertising!

Maybe it’s time I organized my own raid on an Apple store….

In a lawsuit filed in Cook County Circuit Court, Macias alleges that an Evanston store sold him defective art supplies, including a professional-grade gloss, which caused at least 12 of his paintings and artworks to deteriorate, fade and deform.

The whole lawsuit is puzzling as the manufacturer says this is the first they have heard of the gloss being defective after manufacturing it for 26 years.  I searched the internet, and it appears as if Macias is indeed the first to make this claim. I am not personally familiar with Golden Gel Semi- gloss, but it’s hard to deny Macias’ troubles as he  already had to refund one gallery because his work was fading.  Something is clearly wrong if we still have paintings from the Renaissance and  Macias’ work is deteriorating.

Juan Carlos Macias did the the mosaic artwork at the renovated Irving Park Brown Line stop.

Hedgehogs: the pet you can't pet

Breeders of these tiny, prickly critters are reporting their hedgehogs are the hot new thing for rich British women, who are replacing the Chihuahuas and pugs that once had pride of place in their handbags. Domesticated hedgehogs (which cost $400 a pop) are winning the hearts of U.K. buyers — including, reportedly, the wives of several top soccer players — as they require less care and attention than a dog, and are more portable and cheaper to feed.

My roommate has a hedgehog for a pet. Former roommates used to talk about how much they wanted a hedgehog named Sonic as a pet. A friend of mine recently purchased a hedgehog over Craigslist (and had it die on her less than a month later). So why are they so popular? Steve Maciontek, the General Manager at Animal Kingdom, explained in an e-mail:

Animal Kingdom has offered African Pygmy Hedgehogs as pets long before their current popularity became evident.  These shy, quiet pets are great pets for households that cannot have dogs, cats, birds or other small animals.  They are virtually odor-free and rarely have health issues.  Animal Kingdom has seen a growing interest in these pets, particulary with college students, and couples who both work.  We estimate that our sales have doubled during the past year.

If you’re interested in owning one of these little critters yourself,  here’s a comprehensive guide to caring for your hedgehog  including cage arrangement (the poem on top of the page is well worth the click), and here’s a good link on how to litter train your hedgehog. Also, be careful where you get your hedgehog from!

Accidental punctures to themselves from their quills, obesity, and upper respiratory illnesses are the main concerns of hedgehog owners. We caution many of our customers to be very careful where they purchase their pet from.  Many dealers, including internet sellers, have no idea how to pick one of these pets up let alone care for it.  Ask questions.

I personally don’t understand the appeal. Yes, they are cute, but you can’t really cuddle them. My roommate naps on the couch with the hedgehog on her belly. The most entertaining thing the hedgehog does is swim and float around on its back in the bath tub.

Stemming from a line of generally well-received “Dirty Mouth? Clean it up!” TV commercials for Orbit, Wrigley has embraced artistic simplicity and quaint design for its latest viral video experiment. The stop-motion, 90 second spot includes no CG or rendering – all footage was captured with still cameras by hand to emphasize the artist’s homemade art style.

A New York Times piece states “if there is a positive response to the video, more could be produced”.  Well, the youtube video has over 1 million hits and the comments have been fairly positive, the most recent coming from daothaweaponx20:

All good news for ‘Goons’, who has been silent on the matter.  Read my interview with him here.

Both the Reader and TimeOut Chicago have written about the Pop-Up Art Loop Program, where artists display their work in vacant storefronts downtown:

The program is as much about helping landlords rent their property as offering artists places to display their work for free in high-traffic areas. Says Tabing, “This is a temporary response to the retail environment because what we’re advocating is the rental of these spaces.”

Tabing tells us Pop-Up Art Loop came together in less than four months. “The initiative started with our chairman, Lou Raizin, [president of] Broadway in Chicago,” Tabing says. “He had read about these initiatives in other cities, and the city’s Department of Cultural Affairs was looking at this program in other neighborhoods,” so the agency’s director of cultural planning, Julie Burros, offered the CLA advice.

This is all fine and good,  but credit should be given where it is due. Both publications fail to mention Edgewater’s Artists in Motion, an initiative that has been doing the very same exact thing for more than 8 months now. Edgewater Artists in Motion is a joint initiative involving the Edgewater Chamber of Commerce, the Edgewater Community Council, and the Edgewater Development Corporation.   Rae Ann Cecrle is the brains behind the initiative,  and started the program last year in an effort to make the “district more vibrant”, saying  “Edgewater has been hit really bad with the recession”. Cecrle says she just came up with the idea after looking at all the vacant storefronts and reading about gallery closings. Currently, 20 artists are displaying their works in approximately 20 vacant storefronts in Edgewater, for a period of 3 months each.

Displaying the artwork in vacant storefronts is no easy task as each storefront needs to be cleaned and  “we have to be careful of the light and moisture levels to protect the art” says Cecrle, and that does require some investment. Cecrle explained that some artists get co-sponsors to cover the costs.  The new building on Granville and Broadway showcases 8 different artists, and Cecrle says “the owner is really happy” with how the storefronts look.

The Edgewater Chamber is throwing a “Holidays Around the World Celebration” today with an art festival showcasing 25 different artists.  Look for a tree lighting ceremony and a holiday concert. More information can be found on their website here.

The one and only Fruzsina Eördögh
Create a free website or blog at WordPress.com.